SNAKES OF THE PHILIPPINES

Granted, there are many dangers throughout the USA such as bears, cougers & wolves in the eastern and western states, rattlesnakes, water moccasins, and copperhead snakes in many areas, alligators in the southeast and a variety of venomous spiders in various regions but we are often aware of these since our childhood and as a result we remained watchful when in areas where they were prevelent and took the necessary precautions.
Relocating to the Philippines can present dangers to the average person who might otherwise remain innocent and unaware until it is too late. It is best to educate ones-self to the possible dangers so they can be best avoided.
There are 4 types of venomous snakes in the world; elapids, viperids, colubrids, & hydrophiidaes. ALL 4 types are found in the Philippines, in addition to the Python constrictor which can grow to exaggerated sizes.
The elapids are represented by the King Cobra, that grows up to 18 feet in length, which can rise up and look you eye-to-eye or "stand" up to two-thirds of its length and chase you in that position if it desires. Being chased by a snake "standing" 12-feet high across a vacant lot is probably not an easy event to forget!
The viperids are represented by the Russell's Viper and the Temple Viper and the colunbrids consist of the Mangrove and Vine snakes. The hydrophiidaes are the sea snakes, both black bands and yellow bands that rule some areas of the ocean.
The Pythons in the Philippines can average 20 feet in length but claims of much larger ones exist in some sparsely populated areas. They have been known to bring traffic to a complete halt as they leisurely cross a road.

Posted by CebuAngloBoy at 8:54 AM No comments: Links to this post 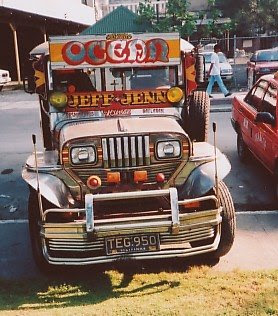 Of all the forms of public transportation in the Philippines, the Jeepney has always received the most publicity because it's so lavishly decorated. But, for me personally, the Jeepney is the third most popular, right behind the trike and the taxi, depending on the distance I need to travel.
For the unfamiliar, the trike is a 3-wheeled motorcycle with a roofed sidecar that will seat up to 5-6 passengers, depending on their size. The Taxis are usually Air-conditioned medium-sized Toyota cars.
Of course, additional modes of travel utilized by the locals also include walking, bikes, scooters and personal cars.
Posted by CebuAngloBoy at 4:24 PM No comments: Links to this post

Something NEVER Seen in the USA 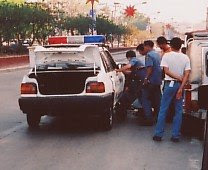 Here two Manila police officers -- in uniform -- proceed to change a flat tire on their police car. Something You Would Never See in America!
I have always found the average Filipino to be very sociable, friendly & completely unpretentious. Even the Police.
In the meantime, a number of passers-by, including me, interrupt their daily routine to watch -- however, none of us offer to help.
Posted by CebuAngloBoy at 12:31 PM No comments: Links to this post 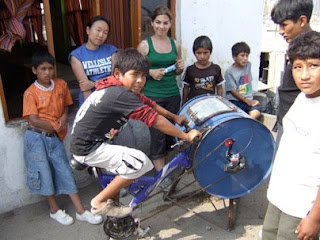 Perfect concept for us aging "Baby Boomers" retiring to the Philippines. This peddle-action washing machine is an energy-saver -- electric hookup unnecessary -- fun for all the little nephews & nieces and a great chance for me to get some much needed exercise. Many of us now look forward to Wash day, especially the women who no longer have that back-breaking scrubbing to do.

Those in America may eventually find themselves forced to "Go Green" & these contraptions might become mandatory by 2012!!
Posted by CebuAngloBoy at 2:00 PM No comments: Links to this post 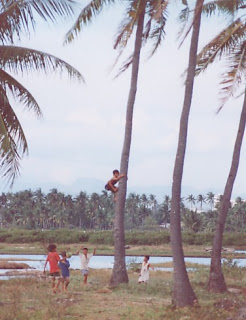 In the Philippines, children learn to climb trees at an early age. In addition to playing a variety of games in the trees, they quickly learn at a young age that once they can climb a tree, they can get a snack. Such knowledge becomes an over-whelming incentive.
Although many of the fruit trees are low and wide and easily accessible, the Mango and Coconut trees on the islands are often quite huge, but I have seen kids -- both boys & girls -- no more than nine or ten years old, shimmy up those trees so fast I could hardly get my camera up in time to photograph it.
Posted by CebuAngloBoy at 8:11 AM No comments: Links to this post