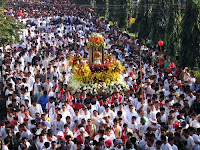 An annual event that takes place on the THIRD SUNDAY of JANUARY to climax the week-long observance of Pasundayag sa Sinulog is Cebu City's Sinulog festival parade.

At noon, a great and nearly hour-long parade begins as gaily decorated floats -- covered in flowers and orchids -- and throngs of colorfully-costumed people, marching, dancing, and singing, make their way through the streets of Cebu City. The participants all dance down the street using a unique "Sinulog step," chanting & singing, accompanied by a shrill, rhythmic whistle blast accompaniment while shouting "Pit Senyor," meaning "viva el Senor" or "long live Santo Nino" -- the Christ Child.

This great Filipino celebration event would be comparable to the annual Mardi Gras parade held in the American city of New Orleans or Rio de Janeiro's Carnival in Brazil, but without the sexual overtones.
Cebu's Sinulog festival is a much more conservative & religious event drawing thousands of spectators and tourits from around the world as well as being an annual home-coming reunion event for many Filipinos.
Posted by CebuAngloBoy at 7:18 AM No comments: Links to this post

Procession of the Black Nazarene

Every year on January 9, the Procession of the Black Nazarene through the streets of the Quiapo district of Manila draws World-Wide attention.

A life-size image of Christ kneeling on a platform and bearing a huge cross on his shoulder is pulled in a huge frenzied all-male procession to lead a massive throng of barefoot devotees down the backstreets of the district in the north part of Manila toward Plaza Miranda in front of the Quiapo Church.

The statute is believed to have been originally brought to Manila by the Spanish during the 17th century after having been hand-crafted by an Aztec of Mexico. Simply to touch any part of the statue, its palanquin, or even the huge ropes used to pull it, is considered to bring absolution of all sins or to bring a miracle to those who need it. As a result, the procession becomes highly charged as thousands jostle through the huge mass of people and struggle forward to reach and touch some portion of the statute. From start to finish, the statue's progress is extremely slow as the massive surging throng make it nearly impossible to move forward as many others throw cloths to those already on the palanquin hoping they will touch the image with it and throw the cloth back to them.
Posted by CebuAngloBoy at 2:07 PM No comments: Links to this post